Noble Cnoteshce — AKA Noble Bey AKA Phelps Mark Out Here Giving DRD’s To Everybody! 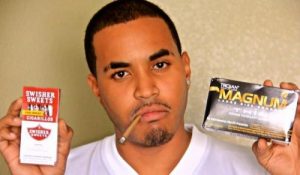 Noble Cnoteshce — AKA Noble Bey AKA Phelps Mark Out Here Giving DRD’s To Everybody!

title says it all, this fool thinks he’s out there getting money while in reality he’s sucking d**k just to sell his mixtapes, going to other cities and taking pictures acting like he’s living a luxurious life just because he won a settlement after he got shot by a real G in Colorado Springs because he a snitch!!! Lmfaoooo, We have proof of his DRD results and he had to leave Colorado Springs, CO originally because of the bad reputation and now he’s starting fresh in Vegas with his girl Devin who he’s so insecure about that he has to diss her ex all the time from different fake accounts on facebook just so he can feel better about himself. Bruhhhhh you’re broke af, you out there giving DRD’s to other girls including your girl with all the threesomes you have, you dont even have a car and people seen your a*5 drive your girl’s jeep all day and night, you take pictures from Miami and other cities acting like you’re traveling the world when in reality you been there like last year and just adding new filters to the pics. You talk s**t to Roy & Samo because they make you so insecure and took their sloppy seconds and yet you still feel insecure and gotta talk s**t about them all the time, you aint s**t, you a snitch and you had to leave a whole state just to start fresh. Biggest keyboard warrior I know lmao #NotSoTravelGang. #YouDontHaveACareer

1 thought on “Noble Cnoteshce — AKA Noble Bey AKA Phelps Mark Out Here Giving DRD’s To Everybody!” Joe Angel Gomez San Antonio TX This man is a master manipulator, compulsive liar, a real sociopath. He will suck you into his web of lies because he has a

Ashley Gray-Gill slept with my husband James Kirby in October of 2015, and gave him an STD, which he then brought home to me. She then continued to call my husband

I personally know Stefanie, she goes by Steffie. She has had sex with men for money. She recently moved to Florida to get away from all of the drama she